Evaluated Node.js, moving 100% to JavaScript – am backing off for a while

It has been fun. Following a month ramping-up on JavaScript, AngularJS, Node.js and Git conclusions are:

Surprisingly easy to get up and running with Node

It is surprisingly easy to get up and running with node, see the below screenshot for what took a little over an hour after deciding to install Ubuntu and use Eclipse as an IDE for node development: 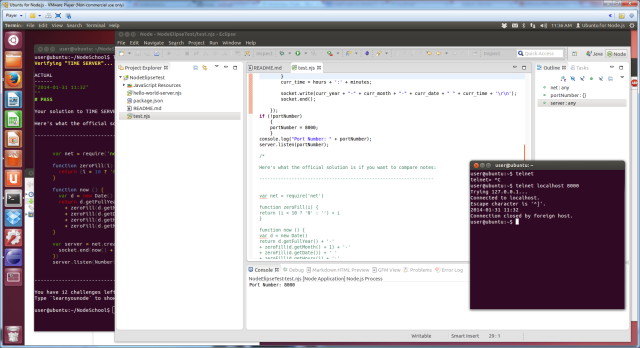 Git is trivial to install on Windows/ Linux. It took minutes to create a Git repository in Dropbox.

Node has a lot of what you are already used to. For almost everything we can do in .Net there is a corresponding Node package. Socket IO, http communication, async, MySQL provider and so on. These are called modules in Node; installed trivially using the Node Package Manager (npm) via a terminal prompt. Many popular JavaScript libraries are also available as Node Modules: Underscore, Mocha and CoffeeScript being particularly popular.

Node literally has one thread and an event loop which cycles through pending events. This means any part of your codebase can block other requests. A major difference is the style of coding in Node. ASP.Net etc are implicitly multi-threaded, pre-empting threads to ensure each server request gets its share of CPU time. Node code must be crafted in a manner so-as nothing blocks a thread.

While learning Node, much tutorial code required piping streams and nesting JavaScript callbacks. Apparently most Node code is like this. Such code soon becomes difficult to follow and comprehend. With familiarity this will improve, but well crafted OO code will always be easier to understand.

JavaScript is everywhere; many developers know JavaScript so why not use it server-side too?

We write validation logic in C# on the server and JavaScript in the browser. Using Node we can reuse the code.

Performance is a huge seller. Apparently Node.js is bad-ass rock star tech that can blow ASP.Net etc out of the water performance-wise. Let me debunk this: performance is an area where I really kick-ass; have tuned many systems (small and large) generally seeing ~100->400 times improvement under load with surprisingly minimal tweaks. Most were systems that had already been tuned.

Performance is a function of your developers and/ or having someone on staff who understands performance holistically. Do not select a technology because its theoretical maximum load is 20% higher. At a fortune 10 I tuned two maxed out Datacenter installs (~thirty machines each) to all the machines using almost zero CPU. Undoubtedly several people spent weeks or months analyzing which machines to buy for ‘peak performance’. Architecture, sensible implementation and tuning are where real performance gains are found.

Performance of Node can be killed by any one bad section of code. Tools to tune Node are very immature. With .Net we use WinDbg/ sos.dll to analyze production systems – it is very difficult to analyze Node in production.

JavaScript is the Future?

As many tech friends said: on my third read of JavaScript the Good Parts it really made sense. Quality coding can be achieved in JavaScript but it is far from a perfect language.

Google’s Dart, Microsoft’s TypeScript and CoffeeScript all bring real OO concepts including classes and even static typing to JavaScript. Currently they transcompile to JavaScript. Within five years expect a language in this category to have gained traction + adopted into all browsers. Current versions of all browsers self-update.. Once most of the world is running self-updating browsers it becomes possible for new standards to roll out quickly. Powers that be in the Internet world will settle on a standard; that is why Microsoft threw TypeScript into the ring.

JavaScript was cobbled together quickly in 1994 as a scripting language for Netscape. It is very weak and will eventually be ousted. Transcompiling is an intermediary step.

Node.js is hot today, but not a good fit for the kind of applications I personally work on: large systems with a traditional RDMS back-end and a lot of inter-system messaging to slow legacy systems.

Node.js is helping building a great base of JavaScript’s frameworks for the enterprise. Be-most are from small untrusted sources. It is only a matter of time until a serious security breach occurs via someone slipping malicious code into an open source JavaScript library. Once a high profile incident occurs the JavaScript community will figure out how to mitigate such attacks.

A Node.js rival with multithreading will appear, or Node itself will be extended. Ruby gained multithreading; after years of its user base stating single threaded web servers are fine.

JavaScript will morph into a real language within five years.

This entry was posted in Uncategorized. Bookmark the permalink.